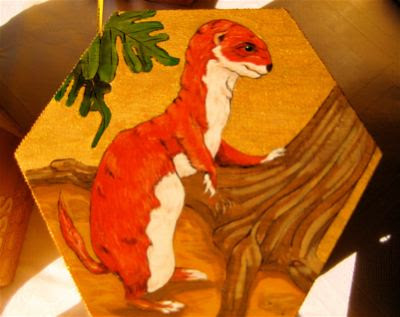 On our island this fellow nattered at us from a tree limb above us when we were packing to go home.  Apparently we had overstayed on his island.  For most of the summer we did not hear from him, only toward the Fall when seeking refuge became an issue.   I'm sure he was requesting that we vacate the cottage in order that he might take up residence for the winter.   Independence is characteristic of the weasel  -a loner when it comes to foraging and taking on others. 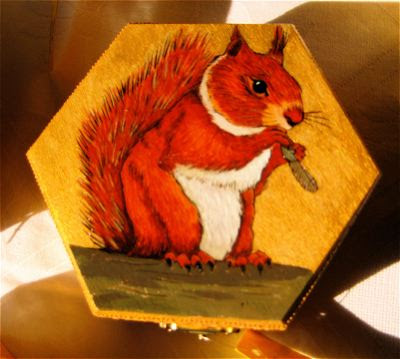 If food was left outside for the birds it was not too long before a squirrel appeared.  I had put up aluminum pie plates to ward off the squirrels' attempts to land upon the bird feeders and strip them of seeds.  The plates worked for a while but the squirrels  found a way around them.  The winter was a constant battle of wits -to which I had been reduced to half  ---
Nevertheless, I had to admire their resourcefulness -although not with great pleasure. 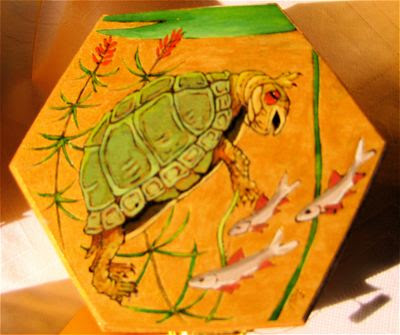 An old boy lived beneath the boathouse, I am sure.  He was a huge turtle without fear.  Two years in a row I had moved him to another location on the lake but each summer he would drift by the cottage.  I could count on his return as I did this year.  And sure enough old reliability once again floated by.  I swear he even smiled. 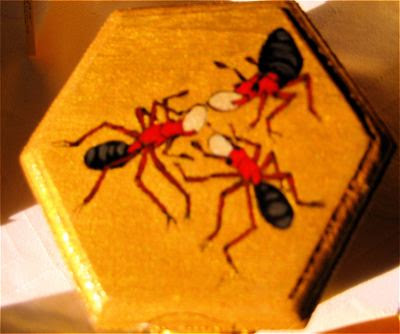 As a boy I made a number of ant farms and watched as they busily set about to build, farm, feed, care for others, defend etc.  Although they were unwelcome guests at picnics and in the house, I could not help but admire their co-operation -even when I had disturbed a nest and a swarm of them would climb all over me and bite.  Co-operation had a more negative aspect when that happened.
Do check the gallery -Peter,  the boxes are for sale.
Email Post
Labels: Musings Pyrography -Acrylic Painting 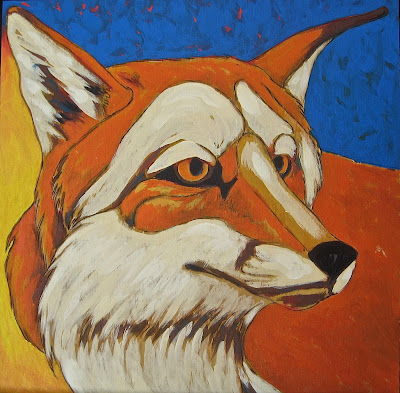